On Sunday, the Global Diving salvage team deployed a remotely operated vehicle (ROV) to the site of the sunken fishing vessel Aleutian Island near Sunset Point on the west side of San Juan Island. The team was able to collect valuable data on water currents and tides, as well as shipwreck assessments.

When the ROV reached the wreckage, approximately one hundred feet of fishing net was discovered. For the safety of on-site personnel and marine life, this debris will be removed as dive operations continue. 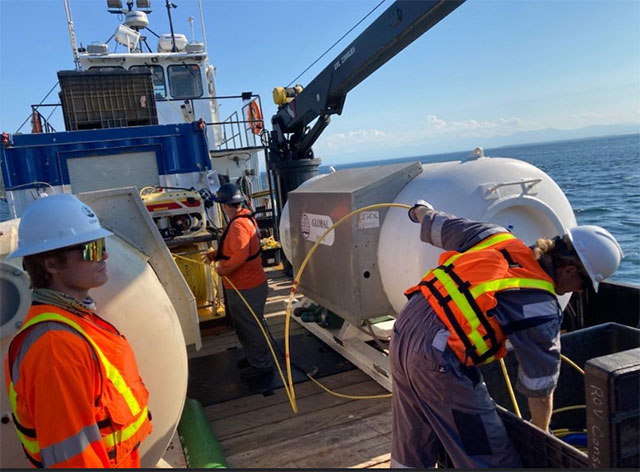 Additionally, a diver inspection of the sunken ship’s hull for structural integrity was performed. The vessel is said to be stable enough for the recovery process to begin, but further inspections by divers are scheduled for Tuesday.

The barge and the crane that will be used to raise the sunken ship, the Aleutian Island, has been firmly anchored, and divers are preparing for underwater operations. Dive team recovery operations are estimated to take ten days once they begin. A temporary safety zone extends for 1,000 meters around the dive site. Coast Guard teams are on hand to enforce the safety zone.

Unified Command appreciates the cooperation of the public as divers and crews work to recover the Aleutian Island without incident for the protection of the environment, sensitive and endangered species and all response personnel working on the incident.

Persons caught violating a Safe Zone are subject to civil penalties under the law.

The violent wakes of boaters breaching the safety zone make the already difficult environment MORE difficult and extremely dangerous. Recently, one person was injured with non-life threatening injuries which caused all operations to stop.

The Federal Aviation Administration (FAA) has issued a temporary flight restriction (TFR) around the incident site. The public cannot fly drones/UAS in this TFR zone, which extends up to 800 feet above the areas around Henry Island and Garrison Bay south to the areas around Eagle Point.

The TFR will remain in effect until 1 a.m. on Thursday, September 1.

3 hours ago Oretha B. Deloach

How much disk space do you need for a WordPress site?

1 day ago Oretha B. Deloach